Friday at WonderCon was for my laziest costume of all, wearing gear from the Bioware Store – N7 dress, jacket, socks, and Omniblade. A few questions and comments about the Omniblade, an occasional nod and “Shepard” when I passed someone similarly or better N7-bedecked. Kicked off a good conversation while in line to get in, and super comfy. Occasional passers by would note “Mass Effect!” but no requests for pictures, all I have are selfies. No worries, kind of what I expected. 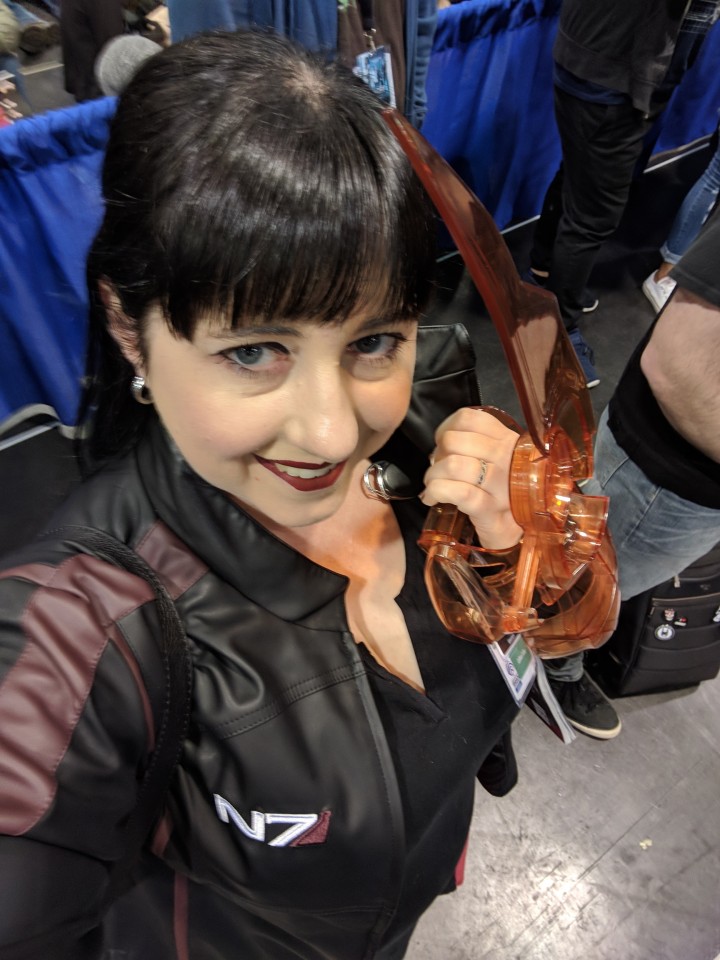 Saturday, however, was Mara Jade – took a little longer to get ready in the morning than I expected. Luckily for me I’d woken up early because I had to make an emergency run home, as I realized the dress for Sunday was still in my closet. Wig went on smoothly, weather was just right for bare arms and limited breath-ability in the fabric. Since the last time I wore it I found my thighs have gotten less thick, so I had to cinch down my pack thigh strap – annoying but also strangely satisfying. I started out the day wearing the Luke-blue-saber hooked to my belt… however the temptation of an Ultrasaber was entirely too strong! 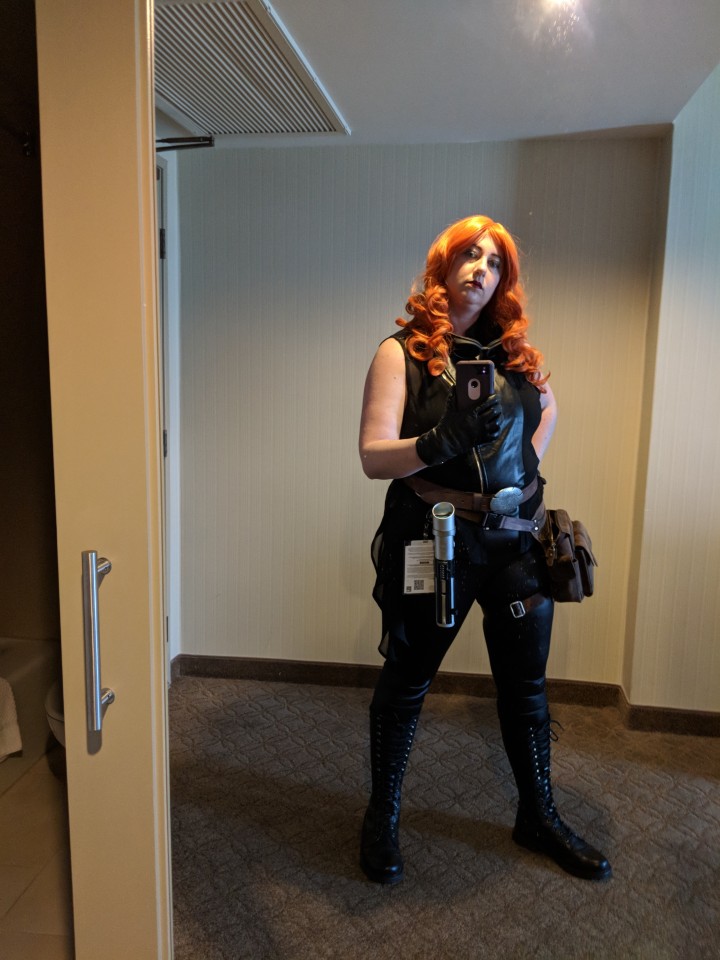 The wig ensured that nobody I knew was going to recognize me until I spoke. The details made me feel good, though, and every time someone recognized the character I got a little thrill out of it. Once I’d added the purple saber it was even easier – to the point where I joined the official Star Wars picture at the fountain I had a member of the 501st mistake me for an actual approved costume/member! Given their strict standards, that’s flattering, however with a bit of research afterwards I found that my costume is too far off and I would have to start close to scratch to actually qualify. 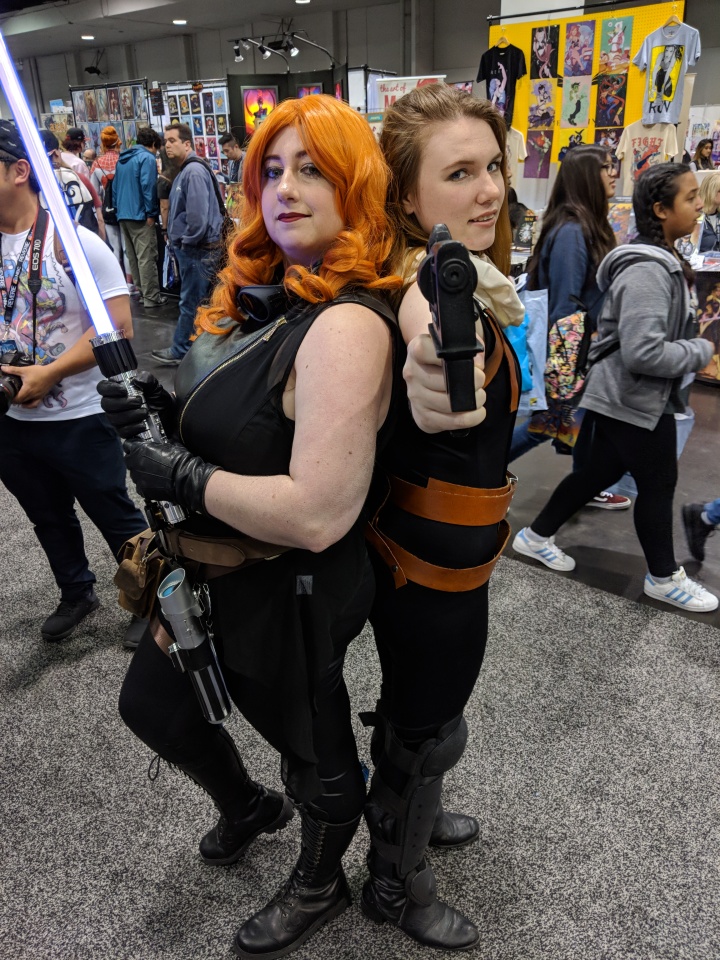 Finding another Mara was one of the highlights of my day, so mad props to https://www.instagram.com/itsriag/ for setting this picture up!

The picture requests were always connected to comments like “I rarely see a Mara Jade!” Being unique made it hard for most people to recognize the non-canon character, but worth it when people did catch it, it added value to the costume for me. Definitely a step up from the no-pictures lazy-Shepard of Friday. Those boots rubbed my left heel raw, my arm was quite tired from holding up the lightsaber all day (after holding up the Omniblade the day before) and despite the aches it was all worth it.

And then Sunday, had to pack up the hotel room at the same time I got ready for a day of cosplay, so not surprised it took me longer than originally planned to get everything together, into the car, checked out, and out to the con areas. But even when shuttling my gear to the car I had someone shout into the elevator “I love your Bombshells Catwoman!” so the day started out great and just got better! 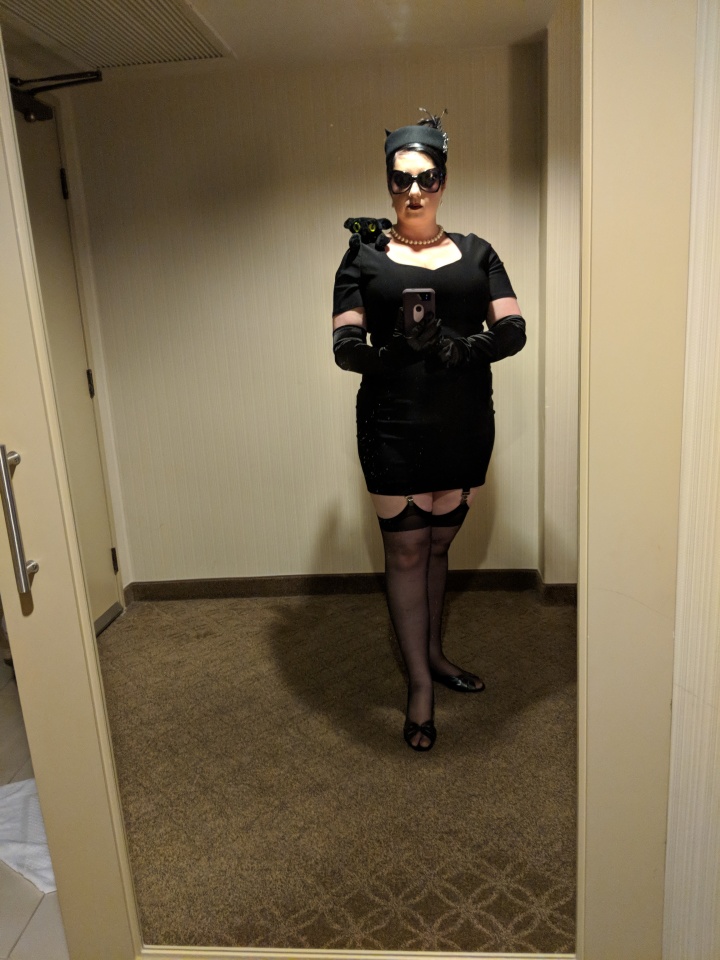 After my last hotel-room selfie I stepped out into something that made me feel amazing… recognition! A few of the photographers that set up outside the halls stopped me on my way in to get pictures, some of these people are pros so it made me feel over-the-moon good, and I was able to put my cards to good use so I can get some of the pictures later. Once in the hall I visited Pinup Girl Clothing, since their dress was the base for the costume, and got to have a good chat. The ladies over at Cryptozoic, who make the cute Bombshells statues, were so excited and it was great to talk with them about the costume, too! Everywhere I went all day it was comments on my accessories or props, shout outs to DC Bombshells, or honest questions about my costume since not everyone is familiar with Bombshells.

All day, casual pictures, pro level set ups, photography students, comments, compliments, every accessory or prop got a call out (except my shoes) – it was so thrilling. Luckily I only had one panel I wanted to make, and due to my Ultrasaber splurge the day before I wasn’t going to be doing anymore shopping, so I had time all day to poke around, visit with people, and enjoy the attention!

I even found a Bombshells Mera! 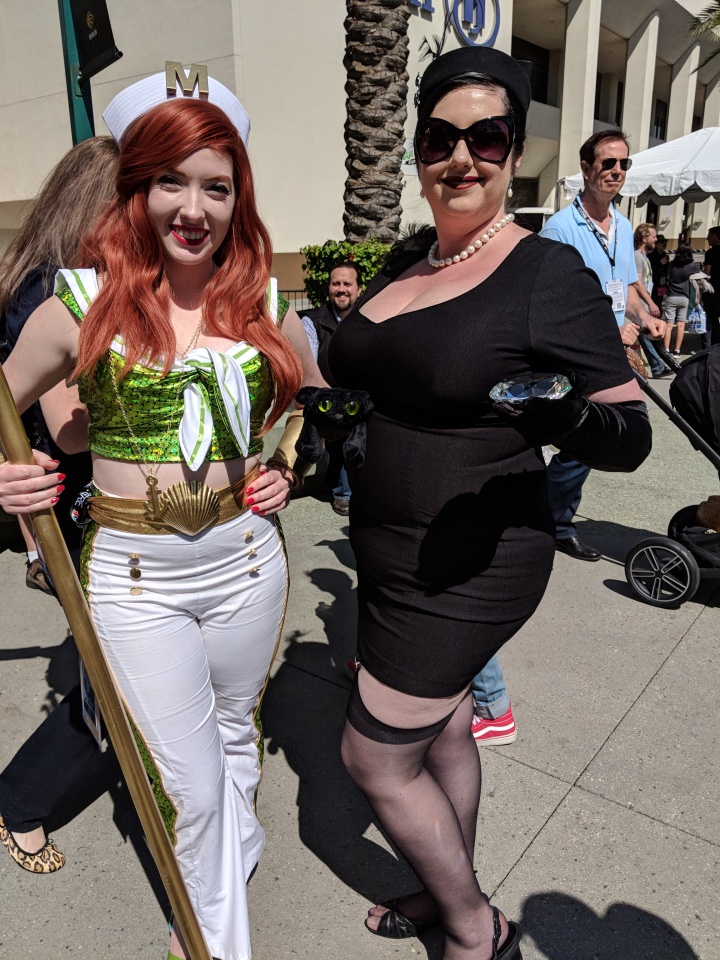 I do regret the amount of time and attention I spent on my eye makeup – once those sunglasses were on there was no chance anyone could see my eyes – even my contacts were silly. But every detail made me feel better, and during the Critical Role Talks Machina panel I did switch out to the clear glasses because otherwise it was a little too dark.

So starting from an occasional nod or quick chat to a full blown day of photography and recognition, to the point where I just about ran out of the small collection of cards I had brought, I ran the full cosplay gamut this weekend! Next year is going to be great!