Yesterday I started out my morning already short on sleep – it was Board Game Night as usual Wednesday night, so I didn’t get home until about midnight, and had to get up earlier than usual for work. Specifically to be at the office early so I could help transport donated clothes to the LGBT+ Youth Center we had made arrangements with during IDAHOTB.

This meant I had to scramble to ensure my car was clear of personal effects (like my N7 jacket, and my sleeping bag) because I didn’t want them to be accidentally donated. In trying to keep the cat out of the garage I slammed the door between the house and garage on my middle finger. OUCH!

Traffic was… trafficy. So I was not as early as I’d hoped, and I had my laptop backpack with me, so I parked under by building before I drove across the street to our campus to ask security to let me park there temporarily while we loaded. Usually I can only park under my building, so I was not looking forward to that persuasion check. On an impulse I set my laptop up on it’s dock so I could ping the person coordinating this effort to let him know to expect me.

That’s what I saw the update from the night before that the donation drop was canceled, so my day was suddenly opened up – kind of a relief- but there I was in the office early. I used the time to catch up on some yearly review work (ick), some planning work on a fun project (yay), and generally was pretty productive, to redeem my exhausted mind state. Everything was once again normal until after lunch.

After lunch I realize my normal one-on-one was canceled earlier that week, so I was just chilling and getting some normal work done when I get a FB message from a friend asking about my plans for the night. This is unusual, especially given that this friend lives out in Riverside, which is not close by. So I explain my plans to go home, watch some of Critical Role, and turn in early…

OR, she suggests, I could join her for the Janelle Monae concert since her planned concert buddy had already paid for a ticket, but had to cancel at last minute due to illness.

YES! I got it cleared with my spouse, and my boss to leave a bit early, and after my next meeting I was gone!

But… I had on a sleeveless light dress (luckily with leggings) and my jacket had been removed from the car due to earlier transportation of donation plans. So a quick trip to a Target that Google said was on the way.

Turns out the USC Target is VERY small, half groceries, nothing larger than a Junior’s size to speak of, and no long sleeve shirts, sweaters, or jackets to be seen (unless I wanted a USC sweatshirt, they had a few). To have avoided wasting my trip I did snag eyeliner and mascara to keep in my purse, since this is not the first time I’d wished I had easily available makeup due to unexpected circumstances. Well, hoping that it wouldn’t get that cold (we were at the Greek which is an outdoor venue) I swung through a drive through to get myself a bit of dinner and made it to the theater early!

Got a bit of makeup on – Selfie mode for phone cameras = great mirror, figured out the venue wi-fi since the Greek is in Griffith Park where phone signal is terrible at best, and took it easy, wished I had brought my book, tried to keep from getting sunburnt on the benches by standing in the shade. Then my friend arrived and we waited for the gates to open, but once they did all was awesome!

She got food, we got cocktails, we bought event merch (a totebag for me, because it was useful), and then we took silly selfies up at the Belvedere Vodka lounge. Because we were early all the staff was slightly bored and gave us a lot of positive attention, so it was a lot of fun. Found out seats, then realized we needed drinks again, but this time we decided to split a bottle of prosecco while watching the opening act – who we knew nothing about.

Turns out the opener, St. Beauty, was a lot of fun! They had great energy and good music, so that was fun. Then we watched it get dark as the place filled to the brim with a ridiculously diverse group of people! 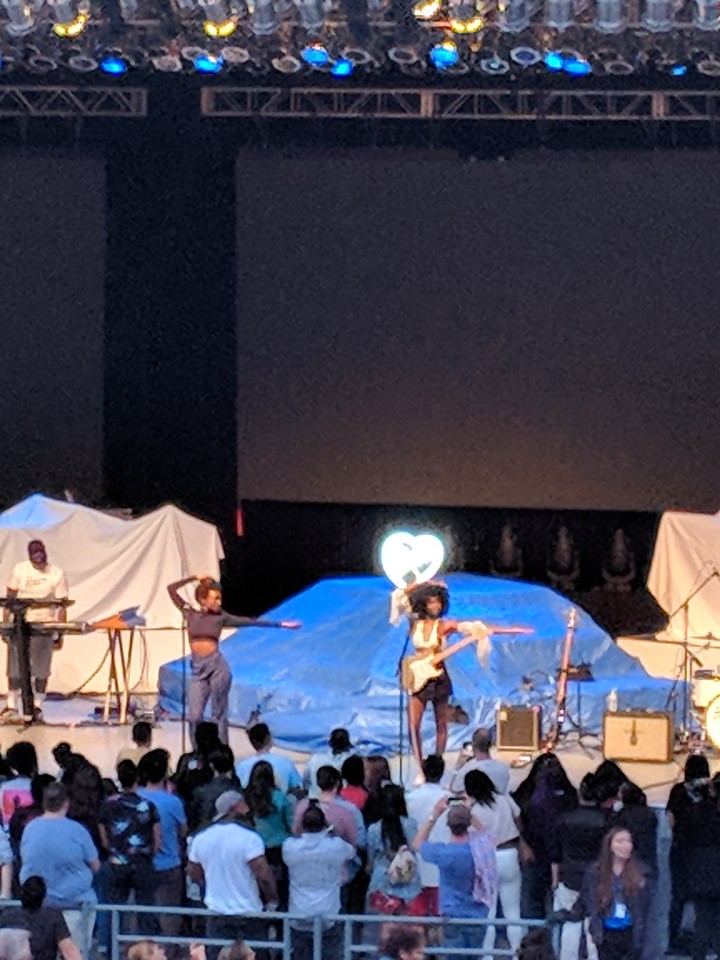 And then… the show. I just, I lack words. Janelle was obviously having a BLAST, you could see it in her smile and bounce the whole night. Especially great was the moment of the encore, when she came out wearing the Pan pride flag, tried to be super serious… but the love and reaction from the crowd was too much and she broke out in the biggest grin of the night.

Of course it’s hard to get pictures during a concert, and I was far more focused on enjoying the show, but a few moments captured on phone-film: 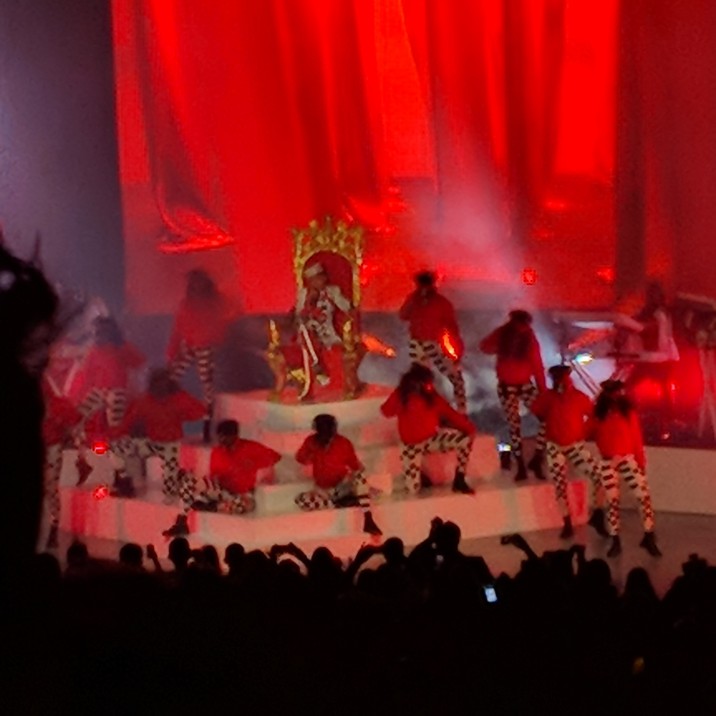 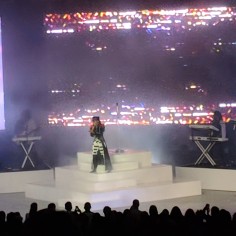 From a day that started with slamming my finger in a door – that was a magical ending.